Today it was Susan's day for a workshop with Robert.

Although Susan has only been doing Bonsai for a short time, she is very keen to learn and has amassed quite a good collection already.
This is a very nice Yew she bought off Ken M earlier this year, it is thriving in her garden and will soon need more work done.

This large Larch was one for today.

Boxie and I were given the task of wiring it. Meanwhile Robert showed Susan how to defoliate a Maple.

Robert started to thin out this Spruce prior to being wired, closely watched by Susan.

Then her and Boxie started to apply wire.

Robert turned his attention back to the Larch.

Adding even more wire and tweaking into place.

Finished for now. WOW, he done it again.

As I have to go to work I had to leave at this point.

Workshop at Ronin tomorrow, watch out for the next post.

An afternoon at Ken's.

This afternoon Ken M had a workshop at his home with Robert Porch, so Boxie and I tagged along to help.

Robert and Ken started on this quite large Pine, which only had it's first styling last year.

There was quite a lot of foliage removed, as this photo shows.

But even so it looks much fuller than before.

Back on it's new plinth that Boxie and I put together while the tree was being styled.

The view from the other side.

Robert has a final look to make sure everything is in place, which it was. This photo also shows a second plinth for a water feature.

This is why it rained all day, Boxie doing a rain dance.

Another tree worked on today, a nice Yew.

After a little tuition and a clip.

A wet but very enjoyable afternoon.
The chilli was very good to Ken.

What a lovely day, rain, rain, rain, the only good thing was it did not stop all morning so we got used to it.

I thought it was about time I did something with this small Itoigawa Juniper, so out came the wire.

Not much to wire but it was worth while doing. Quite a nice image for a first styling.

After a few days of things going wrong, my natter night went off well.

Andy P brought this Cedar that was first styled last year with Robert Porch, here at a workshop.

Ken M brought his Juniper group for yet another clip out.

Paul M brought these two Pisifera to have the wire removed.

Today I was also given this Oak from the guy over the road. I may need some advice on styling this one.

Andy's Cedar after adding some guy wires and a bit of clipping.

A prezzie for Boxie from Dave. A bogwood base, with a carved boat wreck and Cormorant drying off after a dive.

Thanks for a good night folks.

Once again when Dave arrived he brought some thing with him to work on.

This Cotoneaster, which is about two feet from side to side, was in a stone trough in a garden close to where he lives and as the lady had moved out and did not want the plant, but did want the trough, it is now planted up in a tray to grow on for the rest of this season. If everything goes to plan we will do a repot in the spring time and do a basic styling then.

He also brought some small ferns which have been planted into this bogwood landscape.

Here is a photo of a Hosta in flower, this Hosta and pot were given to me by Ben McNulty a few weeks ago and seem to be growing well.

I have been practicing my stone balancing again.

I must get some bigger stones.

Best night ever for heat and sunshine, so we made good use of it and worked in the garden all night.

Susan's tree for tonight this Pisifera,  [Sulpher spray ] looked like a ball, but Susan wanted it more open with pads to make it more like a tree.

So after I had removed quite a lot of unwanted foliage the trunk now stands out better. Susan will now wire the tree and bring it back next week for a tweak.

This tree had us scratching our heads as to what it was.Andy told us it is  known as the Woolly Willow, one of the Salix family.

Another one of Andy's Larch was wired and started on it's way to becoming a cascade style tree.

Ken M brought his Larch for a mid season tidy up

Which kept me busy for quite a good part of the evening, but the end result was worth the work.

Paul M also brought a Larch for some advice about styling. Ken suggested a raft style but as Paul has limited space he decided to leave it upright, so it will be left to grow for another season to improve the trunk size.

Not much work being done here, but it was nice to be able to sit in the sun shine.

It's been one of them rare days that we get now and then, very hot, so not much done in the way of Bonsai.
The only thing I have really done is to give the trees plenty of water.

A mini Rose has come into flower.

Dave brought this Maple stump a few weeks ago.

It was root pruned with a chain saw.

But just look at it now.

My Hemlock had a small prune.

Juniper planted in the bogwood/slate combo.

Much to hot to do anything more. 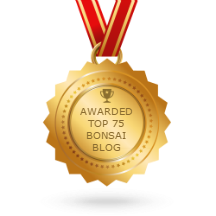 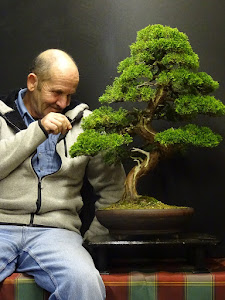